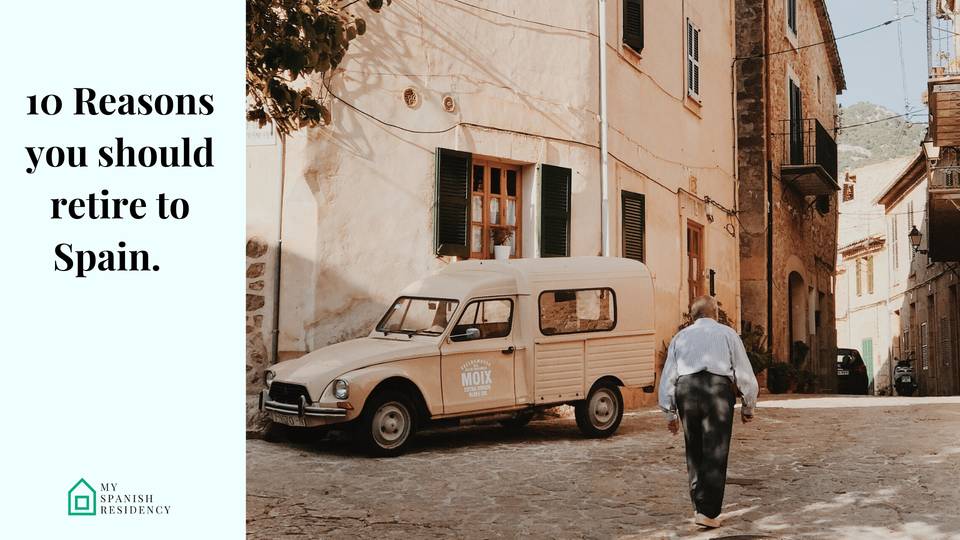 Spain is one of the great beach destinations of European countries. Its warm climate most of the year, the low price of food and the good living standards, make retiring in Spain one of the best options for foreigners.

Each year the International Living Global Retirement Index looks at the best places in the world to retire. This is not a trivial issue, as more and more people opt for a foreign country to enjoy their final years in a good climate. In this study, we found that Spain is one of the top 10 countries to retire.

We could start by highlighting all that Spain has to offer. But let’s avoid the typical phrase “sun, perfect climate, delicious food…”. That’s something we all know. Let’s go deeper into what’s really important: the exact steps and considerations to follow to retire in Spain.

It doesn’t matter which city you choose or which house you buy, if you don’t have a residence permit in the country you won’t be able to stay legally in Spain for more than 3 months.

So, what is the visa that will allow you to stay in Spain for the long term?

The retirement visa in Spain, which is called a non-lucrative visa or non-profit residence permit. This is the residence permit that will allow you to live in the country without carrying out any economic activity; something that you do not intend to do when you retire.

Requirements of the retirement visa

What are the requirements of the retirement visa?

– Having more than €40,000 in a bank account. You can have the money in any currency convertible to the euro, and it is not necessary to have it in a Spanish bank account. However, depending on your country of origin (China, for example), the Spanish Foreign Office will ask you to have this exact amount in a bank account within the Spanish territory. Since you are planning to live here for the long term, our advice is to open a bank account as soon as possible and transfer the money to it.

– Have a private medical insurance contracted with a Spanish company. Please note that this contract must offer full coverage within Spanish territory and no co-payments.
The non-profit residence visa will allow you to live legally in Spain for one year. At the end of that period, you can renew your permit for 2 and 2 more years (as long as you still meet the initial requirements).

Once the third renewal ends, you will have lived in the country for 5 years. This will allow you to obtain permanent residence. This is another type of permit that allows you to live for 5 years in Spain. And finally, once those 5 years are over, you can obtain Spanish citizenship.

*Important note. The retirement residence permit requires you to stay in Spain for at least 183 days a year. This, as we will see, will have an impact on the taxes you will have to pay.

Cost Of Retiring in Spain

You can live in Spain with an income between €20,000 and €25,000 a year and enjoy a more than decent life. However, you will have to take into account the monetary requirement attached to the Non-Lucrative Visa. If we only consider the day-to-day costs, you can retire in Spain more than comfortably for €25,000 a year. That breaks down to roughly $2,083 per month.

There is no doubt that the cost of living is a little more expensive in the capitals (Barcelona, Madrid, …), but you can always enjoy a menu for 10 € in any restaurant. A monthly transport pass can cost you between 40 and 50€, and rent an apartment 600 € per person/month (in a decent location).

Retiring in Spain from the US

While the exchange rate for U.S. and Canadian retirees isn’t as favorable as it is on other parts of the world (€1 = $1.19 USD/$1.48 CAD), Spain is still very affordable compared to other western European countries.

In Madrid, Spain’s capital and most expensive city, a single-person’s monthly cost (without rent) is $773 USD. A meal at a casual restaurant will cost around $11USD, while weekly groceries for two can cost under $30 USD.

In comparison, if you want to retire abroad in Spain to a more coastal beach town, away from the major cities, you can get more bang for your buck. In Valencia, for example, a one-bedroom city center apartment will cost around $650 USD per month, while the same apartment outside of the city center will cost $450 USD per month.American citizens will also have to file a U.S. tax return. However, due to a tax treaty between Spain and the U.S., you can avoid double taxation. It may be beneficial for you to work with a financial advisor before and during retirement. MySpanishResiding can find an advisor for you that helps filling your taxes in Spain, minimizing tax burden.

When assessing the cost of housing in Spain, you should decide wether you want to rent or buy a property.

First of all, you should bear in mind that the real estate market in cities such as Barcelona and Madrid has experienced drastic growth lately. This means that buying a house or flat in the capitals is very expensive nowadays. However, you have the ideal option to buy a property in the surrounding area, being much more affordable. But perhaps our best advice would be to start renting before you buy.

Once you have clearly defined which region best suits your situation and tastes, consider the option to buy. But not before, as it can be a risky action.

Settling down in a one-bedroom in a big city like Madrid or Barcelona can set you back about $900 in rent each month. Outside the city you can find rent prices that can reach as low as $450.

Best Cities to Retire in Spain

Depending on our tastes, lifestyle or family conditions we will give more weight to some factors or others but there are certain cities in our country that have, a priori, better characteristics to reach a certain balance between all the aspects that we value to make our day to day more pleasant. In this article we review some of these indicators that reflect that a city is good to live; we make a tour of ten Spanish cities that achieve a good score and that can contribute to making life in them comfortable and our day to day, much happier. Let’s visit the 10 best cities to live in Spain!

Retirement in Madrid and Barcelona

Madrid and Barcelona are the only Spanish cities that figure in one of the most respected cities when it comes to measuring the suitability of a home to live in. The classification we are talking about is the one elaborated every year by the British magazine Monocle, which evaluates the quality of life in the cities of the world. Madrid is ranked seventh in the world on this list, surpassing the previous year’s position by three positions; Barcelona is ranked 19th, two lower than in the previous edition. Along the same lines, the survey carried out by Networking Service InterNations points to Madrid as the third best city in the world to live in and to Barcelona, the other Spanish city on the list, number eleven.

What the experts of the city of Madrid highlight most is its cultural offer and the mixture of people and cultures that inhabit this city. Also important in Madrid are the professional opportunities it offers, air and land connectivity with other Spanish and foreign cities. Of course, Madrid is famous for its vibrant leisure offer, with a Madrid night that never goes out of style.

Valencia is the third biggest city in Spain, Madrid and Barcelona and even Seville have always taken away the protagonism it deserves. Valencia is an unknown or eclipsed city at international level, (despite having been recognized by some media as the “best city in the world to live“). However, Valencia is standing out and above all for foreigners as the city of well-being.

Valencia has urban beaches bathed by the Mediterranean, 300 days of sunshine a year, music and joy in their veins, a cuisine that has crossed all borders (although without knowing the origin, Paella is known anywhere in the world, but few know that it is a typical Valencian dish), an enviable cultural and artistic heritage, Valencia is also becoming fashionable for its relaxed life … Who gives more?

For all this reasons, we believe retiring in Valencia is a winning bet.

Safe and friendly. For many, the capital of the “Costa del Sol”, a city that has become a complete cultural and commercial center.

Malaga is one of the preferred destinations for citizens who choose to retire in Spain. The perfect weather conditions all year round create the ideal environment to enjoy its charm every day.

As in any part of southern Spain, the people of Malaga like to live on the street. That’s why you’ll find it easy to enjoy a great glass of wine with some tapas on any terrace in the city.

In addition, its incredible cuisine, architecture and infrastructure will enchant you.

Now let’s go south to a city that, although a little smaller than the previous ones, Granada hides an incredible charm.

Why can’t we deny the fact that most people know this city because it houses one of the wonders like the Alhambra, a UNESCO world heritage site. You can’t live in Spain and not visit it at least once.

Being able to explore all the remains left by Arab culture is really worthwhile. But you can find much more in Granada.

Because the city is framed by mountains in the north, you can embark on mind-blowing walks in which the extraordinary views will delight you. In addition, the fact that Granada has a beach just a few kilometres to the south means that it offers the best of both worlds.

There is a reason why students (not just from Spain) choose it as the city in which they will get their degree. And that reason is simple: the atmosphere is really cheerful and lively.

Granada is also a cheap city to live in. Therefore, it can become the perfect base for you to use when visiting any other region in the south of the country.

Seville is another great Spanish city, although smaller than Madrid or Barcelona; this makes it a city with closer distances but also with multiple opportunities. And it is that the aspects that have to do with the professional world continue to have an enormous weight when choosing the city in which we live, that is undeniable, but there are other issues that are also taken into account today when establishing our residence. Seville has many of those characteristics that make a city a perfect place to retire in Spain. In addition to having a special color, it highlights the friendliness of its people and the beauty of the city.

If you are looking to retire in Spain, we can put you in touch with a team of specialised lawyers that can help you all along the retirement process. Contact Us!